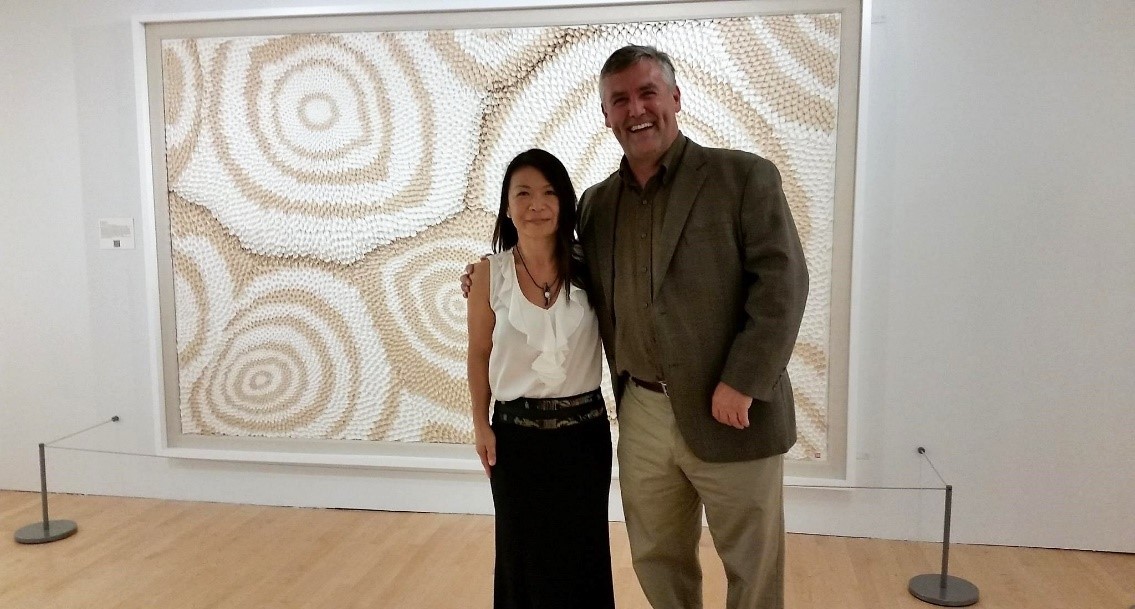 Bringing cultural programs from Australia to Washington, DC is certainly no easy task given the vast distance between our two continents. So, when the Australian Embassy opened their doors for an exhibit featuring work by Hiromi Ashlin, a master origami artist introduced to us by longtime client and friend Ron Acker, we were excited to say the least.

Ashlin’s Australian Embassy show was a turning point for both her and Broadway Gallery. The gallery was delighted to frame her work, “Quartet: Town of Pearl No. 2”, for display in the embassy (pictured below), as well as welcome Ashlin as a permanent member of the Broadway Gallery artist stable.  An internationally renowned Japanese-Australian artist, Ashlin’s work combines her Japanese roots in origami with the inspiration she found while living in the Australian outback.  Her work is incredibly unique in that she uses indigenous Japanese mediums like washi paper to create her intricate origami pieces which are then infused with ink, colors, and textures inspired by the Australian wild.

Hiromi Ashlin was born in Kawasaki City, Japan, and spent her early years perfecting her origami skills, which she tells us is “part of the Japanese culture and is passed down from parents to children, teachers to students, and friends to friends.” She says her inspiration behind the use of origami to create her masterpieces came from the “one thousand cranes” Japanese legend that promises anyone who folds a thousand origami cranes will be granted happiness or good luck.

In 2004, Ashlin moved to Broome, a town off the coast of Western Australia, and began making assorted arts and crafts from her Japanese heritage, mostly created with washi paper. The paper itself has its roots firmly in Japanese culture, as it is comprised of ingredients indigenous to the island and has been used for over 2,000 years.

In addition to the washi paper, Ashlin uses pearls, stones, gold leaf, and twine in her works. Pearls are ingrained in Broome culture; the town was originally founded as a pearling port in the 1880’s. Ashlin tells us that the use of pearls in her pieces “represent place” while the gold leaf symbolizes “the inside of ourselves.” Her artwork combines the “indigenous spirituality, color, and design” from Broome with “patterns of old Japanese design.”

Examples of this fusion of Japanese and Australian culture can be seen everywhere in Ashlin’s work. “Sandalwood” (pictured below), was created on handmade washi paper and decorated by burning figures into the paper using Australian incense sticks. The use of incense was an artistic and spiritual part of Ashlin’s art practice gained during her time in Broome.

The enormous time required to fold and arrange hundreds, and sometimes thousands of origami elements, makes Ashlin’s art incomparable and unique. As she tells us, she enjoys folding “while listening to music”, but when it comes to the final work, she needs “silence, as it requires complete concentration.”

To say Hiromi Ashlin is an origami master does not give her the full credit she deserves; she is much more than just an origami master. She is an artist who has defined her career by the ability to seamlessly blend two cultures into fantastic, poignant, and important works of art. When asked what to expect from Hiromi in the future, she says, “I want to make some works focused on light… something simple or one color, but showing bright light.”

Whatever Hiromi decides to create next, we know we’ll be amazed.

Since her show at the Australian Embassy, Broadway Gallery has continued to be the sole gallery representative of Ashlin’s work in the United States. Stop by our Alexandria and Great Falls galleries to see the masterful works on display by Hiromi Ashlin.